People who age fantastically well leave clues; I have spent 18 years studying those clues so you can replicate what they do in order to be they same. You can use your mind to trick your body into feeling and then becoming younger. We all have three ages. We have a chronological or birth certificate age, we have a biological one – the age of our organs, and we have a psychological one – the age we feel.

People who age fantastically well leave clues; I have spent 18 years studying those clues so you can replicate what they do in order to be they same. You can use your mind to trick your body into feeling and then becoming younger. We all have three ages. We have a chronological or birth certificate age, we have a biological one – the age of our organs, and we have a psychological one – the age we feel.

When we do young things; laughing, dancing and having sex, we send a message to our bodies that we are young and this slows down how we age. The younger you feel and act the more you lower your biological age. Our bodies get older on their own timetable. A runner aged 40 may have the heart and lungs of a 25 year old but the knees of a 55 year old. Your birth certificate age is the least important. How old you feel and act are far more important if you want to grow older without growing old.

In 2010 Harvard psychologist Dr Ellen Langer took a group of celebrities to a retreat for a BBC programme. It was furnished from 1980 – all the magazines, radio shows and TV programmes were from the 80s, and each person wore a badge of a photo of themselves from then. Before starting, the group underwent tests to determine their age including grip, vision, hearing, balance, hormones,muscle strength, and so on. They all spent a week living as if it was 30 years earlier. Everything going on around them was engineered to enable them to act as they had 30 years ago, subconsciously tricking themselves to believe they were younger. After seven days, they took the same tests again… and all had reversed their age by a minimum of between seven and ten years, and had a new lease of life. When asked to describe what had happened they reported forgetting they were older and as a result they physically grew younger.

These experiments prove that your beliefs determine how you age. If you think and act old, you grow old prematurely, whereas when you think and act younger, you remain younger physically and mentally. That’s why people like Cliff Richard and Keith Richards have aged in a rather unique way, because they are singers, dancing on stage and doing something youthful for a living they are seen as eternally young. Cliff Richards is called Peter Pan and Keith who should have aged terribly because of his abusive lifestyle proves that doing young things and thinking young thoughts is powerful enough to overcome the ageing effect of bad habits. Women who are very girly like Lulu and Goldie Hawn grow older differently because giggling, laughing and doing younger things keeps you younger. Girly thoughts and actions make you stay more girly.
Nelson Mandella spent 30 years in jail with no access to good food or vitamins yet his passion for life kept him youthful alert and full of life. People in Japan with a different expectation of ageing age differently as do people who love exercise, embrace new technology and have an active life – they stay young for longer. Have you noticed those people who seem to love exercise, embrace new technology, love being with younger people and have an active social life are the people who tend to look young, vibrant and happy? That’s not a coincidence; it’s because they are doing the things they did when young. They get the added benefit of looking younger because that’s the way they feel (not the other way round).
If you don’t want to grow old badly don’t use ageing language. Don’t say “I’m too old to wear that,” or “I can’t do that at my age.” Instead of saying “I look old”, which is seen by the mind as permanent, change it to “I look tired.” Your mind accepts that tired is temporary and after sleep you’ll look younger. Using words like knackered, past it, gaga, at my time of life and at my age cause your mind to accept that ageing and deteriorating are inevitable when that does not have to be the case. If you want to be part of the new old age, use words like youthful, vibrant, full of life and vitality. Your mind believes everything you tell it and acts on those words so if you say “I forgot, it must be my age,” or “I am so cranky and tired I cant stay up late at my age,” you are allowing yourself to believe it is beyond your influence, which is not true. Instead, remember that children forget things all the time and babies are cranky without enough sleep; it’s not your age so don’t attribute negative behaviours to your years. Changing the words you use to describe yourself changes how you look and feel.

We live in exciting times where being 50 means you are only halfway through your life. We don’t dread getting old, we dread losing our youth and vitality. You can grow older without growing old while adding years to your lifespan. Women like Jane Fonda, Mary Berry and Catherine Deneuve are showing us the new old age as they refuse to conform to what ageing is.
You can also trick your mind into staying young by continuing to learn new things throughout life. Doing new and different things keeps your brain elastic, sharp and finely-tuned. Professors in their 90s have brain neurons equal to those of 30. We only age when we stop doing new things, so embrace newness and change and you will stay mentally younger; this in turn keeps you physically younger. Our mind doesn’t age unless we stop using it. You can keep your memory and thinking sharp by reading your paper and doing crosswords on your iPad, use Skype, instagram and twitter as this will keep your mind in peak condition because anything new boosts your brainpower.
Halt ageing with nuerobics

We make new brain neurons when we practice nuerobics. This simply means if you’re right handed, hold your toothbrush and your TV remote with your left hand, and go upstairs leading with your left leg. When you use the ‘wrong’ hand or leg this makes new neurons boosting brain power. These simple tricks give you tangible results so that you age in ways that make others envy you. 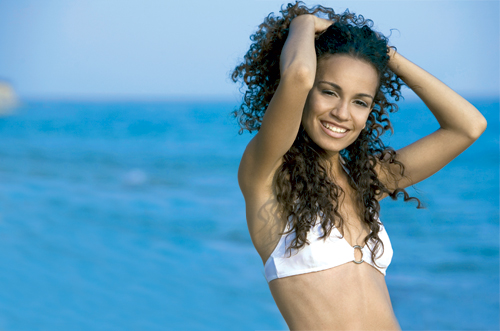 Why Targeting Your Bum Muscles is Important When Working Out

7 Herbs and Spices to Keep you Healthy

Patsy Kensit: The Joy of Me, Myself and I